Empires: Dawn of the Modern World 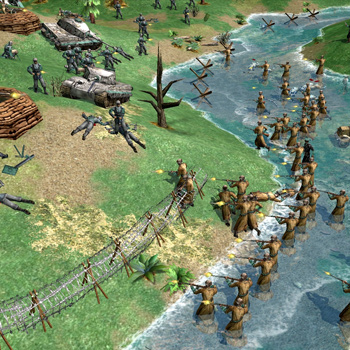 Empires: Dawn of the Modern World is a historical Real Time Strategy Game (RTS) developed by Stainless Steel Studios and published by Activision. Stainless Steel is best known for making Empire Earth, and founder Rick Goodman who was the lead designer for the giant hit Age of Empires.

Empires: Dawn of the Modern World builds on top of past RTS tradition with ideas and features tested by fan praise. For example, Empires will have support for recorded games, multiplayer scenarios, a challenging and both easier/harder single player AI, multiplayer advanced support, and more! Empires most compelling and obvious feature is the 7 completely unique civilizations with special abilities, art style, units, and buildings. Each civilization will play with their own rules, basically getting to play several games in one. Empires also spans from the Medieval Age all the way to the end of World War II, the very best of military history.

Command the underdog Koreans as they push back a Japanese invasion at 100 to 1 odds, command the English through the Reformation and Discovery, command France's forces against Germany's invasion using deadly gas and the first of attacking airplanes, or command thousands of Allied or Axis troops during D-Day invasion. Best of all, Empires has a very strong scenario editor used by actual past fan designers to create your own dream historic scenario or play other's from our downloads. The only limit will be one's creativity.