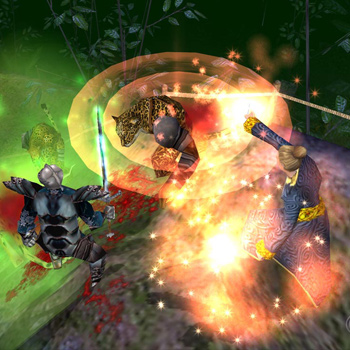 Players return to the world of Aranna and start an all-new adventure in the Dungeon Siege expansion pack, an addition to the popular Dungeon Siege PC title. Players are drawn outside the original Kingdom of Ehb into the wilds of Aranna to solve an ancient mystery.

The adventure reveals the origins, lives and eventual downfall of the ancient Utraean civilization. Building on the critically acclaimed gameplay found in Dungeon Siege, the expansion pack features a new part of the world to explore, fantastic creatures to battle, treasures to loot, mysteries to unlock, weapons to wield, armor for protection and unique items sets.

All-new campaign. Journey through nine spectacular areas, including an all-new jungle region, as you unravel the rich history and mystery of the world of Aranna.

Even more intense battles. As you adventure through Aranna, you'll encounter previously unseen creatures to battle, including the reptilian Zaurask and the catlike Hassat.

Cooler treasures. Discover rare and powerful treasure sets among the spoils of battle that, when combined, grant the owner new and wondrous abilities.

New pack animal. This pack animal fights back, defending the player's treasure to the death if necessary.