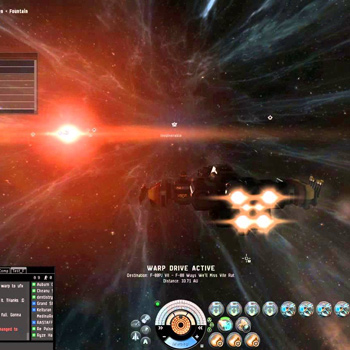 EVE Online is the forerunner of next generation massive multiplayer online role-playing games (MMORPGs) set in a world of galactic magnitude and governed by a hyper capitalistic economy.

In a universe of this scope, you are free to discover your own place, be it in the form of a humble trader ferrying goods from system to system, a despicable pirate preying on anyone foolish enough to cross your path, a heroic combat pilot lancing through the fray as you battle for your faction, or a mighty business icon leading a corporation with hundreds of employees.

To accomplish any or all of this, your main tools will include a diverse array of sophisticated equipment, spaceships, and social interfaces, but youll also need a strong business acumen, cunning combat strategies, and often pure Machiavellian thinking.

Truly Massive Universe serving hundreds of thousands of inhabitants in a single universe with no sharding.

Unique Offline Skill Advancement with over 150 skills that allows for offline training.

Free-form Professions ensures no limitations on professions. Be a trader, fighter, industrialist, researcher, hunter, pirate or a mixture of them all.

Ships and Unlimited Customization with 100 different player ships and over 3.800 different modules.

Player Research and Manufacturing where ships and modules fully manufacturable and researchable by players.

Faction and Agent System with 20 NPC Factions and 170 NPC corporations containing a mission system with over 5600 NPC Agents to interact with.

Over 250 types of in-space NPC's including pirates, law enforcement, civilians and convoys.