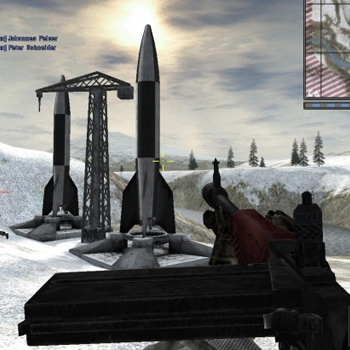 ALL-OUT WAR ON THE SECRET BATTLEFIELDS OF WWII

Battlefield 1942: Secret Weapons of WWII* lets you control the most bizarre and lethal top-secret weapons of the Second World War. Straight from Allied and Axis laboratories, many of these weapons never saw combat until now!

Defeat your enemies with a variety of experimental firepower, including the Wasserfall Guided Rocket, the Natter Rocket Plane, and the revolutionary Rocket Pack. Drop from a cargo plane behind enemy lines and prepare for close combat with one-shot-kill knives, new machine guns, and more. Give all of these weapons and vehicles a trial by fire on eight tough new battle maps.

This is your chance to take the experiments out of the lab and into combat in the all-new Expansion Pack to Battlefield 1942, the 2002 PC Game of the Year.