Lord of the Rings: The Return of the King 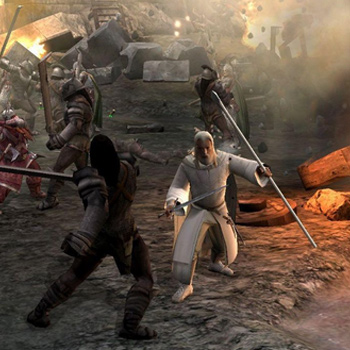 The Lord of the Rings: Return of the King video game again puts the fate of middle-earth in the hands of the gamer. In the last installment of the movie trilogy, destroy the Ring by casting it into the Crack of Doom, which frees Middle Earth from Dark Lord Sauron.

Return of the King's third person gameplay allows immersive action set in rich, interactive levels. The new game also features an all new co-op multiplayer mode which lets players form their own Fellowship and eight playable characters like Gandalf, Aragorn, Legolas, Gimil, Sam and Frodo all played out by thier actual actors from the films, battle vicious boss monsters like Shelob and the final showdown with Dark Lord Sauron, all backed up by Academy Award winner Howard Shore.