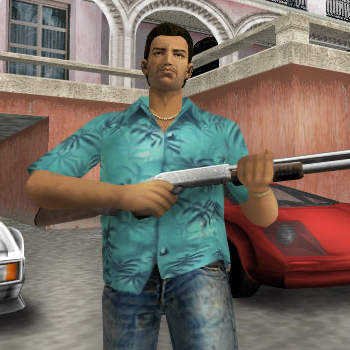 GTA:VC takes place in a fictional city in the eighties that is supposed to be modeled after a drug-infested Miami, Florida.

You play as Tommy Vercetti (voiced by GTAIII), a gangster who just got off a fifteen year prison sentence for not squealing on your friends. Because you didn't rat out your "family", you're sent to work with Sonny Forelli, your previous boss. Sonny gives you an easy drug job, but everything goes wrong, and Tommy loses everything. Upon returning to Sonny, he gets mad and wants his money back. Unfortunately, everybody in Vice City, from gangsters and Cubans to bikers and politicians are in his way, and it's up to Tommy to clear a path.

GTA:VC takes everything from GTAIII and builds upon it. There are new cars in the game, reminiscent of cars from the 80s. Some cars are earlier versions of the vehicles you drove in GTAIII. New to VC is the ability to drive motorcycles. You can drive a variety of two-wheeled vehicles, from huge Harley-esque bikes to dirt bikes to your standard motorcycle.

Flying is also a bigger part of VC. You can now fly helicopters, traveling from area to area, landing on helipads on top of towering skyscrapers.

Weapons are, more or less, the same as in GTAIII, but the addition of melee weapons spices it up a little. You can use riot batons, crowbars, and a few others.

Missions range from delivering items to performing tasks. Back again is the ability to drive a taxi, ambulance, fire truck and police cruiser.