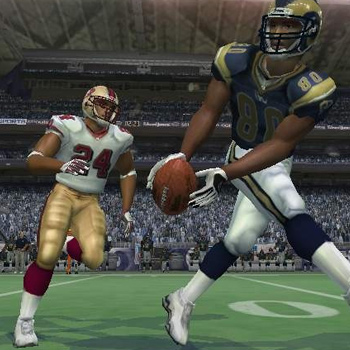 The long running Madden series returns for another series of NFL action on nearly every platform available in 2003.

New to the series this year are, of course, every new player included in the rosters for the new season, along with every other defensive and attacking player from every team in the league.

New gameplay modes include Owner Mode, an option that allows you to hire your own staff, set prices for tickets and hot dogs, build your own stadium, organise camps pre-season, and nearly everything else an owner needs to do to make his or her team special.

Play a full season and go all the way towards the Super Bowl final, or re-live special moments from past games and try to change history. You can use a full playbook based on the pros, with a host of tricks and formations.

Those new to the series (or NFL in general) can watch video tutorials presented by Al Michaels and Melissa Stark, to fill you in on every little detail of the sport and the game (not available on GBA).