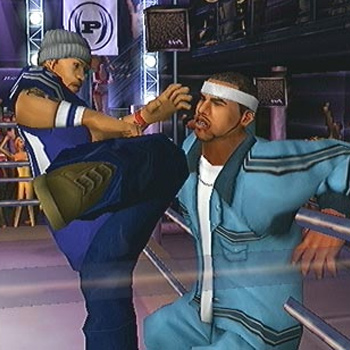 Throw on your flyest gear, round up your crew and take it to the streets - the world of hip-hop has hit the ring. Def Jam VENDETTA by EASPORTS BIG invites you to the underground circuit of hardcore fight clubs. Get your props, as the master of hip-hop hook up with the urban local legends and battle for ultimate supremacy. If you think you've got what it takes, Def Jam VENDETTA challenges you to brawl your way up the ranks to be the ultimate fighter.

The game will feature an original storyline as players are challenged to test their skills through an arcade-style, underground fight club circuit as they attempt to totally crush their opponents. With each win the player will gain more money, more power and of course more respect. And it won't just be about winning. After all, it's about making a rep for yourself, and humiliating your opponent with killer moves. Def Jam VENDETTA will feature over 1,500 varying moves, including dozens of signature special finishing moves and trash-talkin' taunts.

Def Jam VENDETTA marks the first interactive entertainment title from EA and Def Jam Records, and will fully integrate a powerhouse roster of Def Jam artists into the storyline, including new hit songs from the artists, as well as classic Def Jam tracks. Each artist has contributed one original introduction and victory sequence incorporating their own voice and motion. Artists participating in the game include DMX, Ludacris, Method Man, Redman, NORE, Scarface, Ghostface Killah, Capone, Keith Murray and WC. The game also features Def Jam.