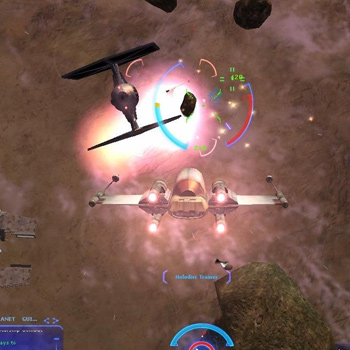 Star Wars Galaxies: Jump to Lightspeed was the first expansion to the MMORPG Star Wars Galaxies  released on October 27, 2004. The expansion added space-based content to the basic, "ground-based" game, along with the option to create characters of the Sullustan and Ithorian  species. Characters are allowed to choose one of three piloting professions, each one based on the character's Galactic Civil War faction -- Rebel, Imperial, or Freelance. This profession is separate from the character's ground profession, although earning experience points in space will also give the character experience points toward a ground combat profession.

Star Wars Galaxies: Jump To Lightspeed lets you engage in real-time dogfights against faction-aligned opponents or AI-controlled ships while traveling throughout 10 space sectors. When not in combat, you can build and customize your own ships, including the YT-1300 transports. The game also includes more than 100 new story-driven space missions, four new space-specific professions, and two new completely customizable species. Now you can fly your customized starfighters and starships through asteroid fields, nebulae, and into PvE battle against capital ships.