Lord of the Rings: Battle for Middle-Earth 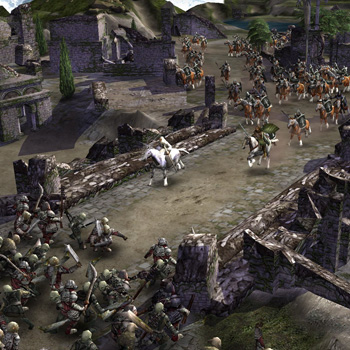 The Lord of the Rings, The Battle for Middle-earth is an unprecedented real-time strategy game that delivers the epic scope and depth of J.R.R. Tolkien's amazing world. You are in complete control of the epic battles as depicted in all three installments of the blockbuster The Lord of the Rings movie trilogy. From waging all-out combat among Middle-earths vast armies to controlling your favorite heroes while managing the resources of your side, the fate of a living, breathing Middle-earth is in your hands.

Built upon the acclaimed "Command & Conquer Generals" 3D game engine, The Battle for Middle-earth allows you to command the forces of light or darkness in two separate campaigns. You'll have to choose your forces wisely, since each army has its own unique strengths and weaknesses.

Complete with all of the epic music, actor voices, and other film assets seamlessly integrated into the game, The Battle for Middle-earth offers a truly memorable entertainment experience.

Command the heroes and armies of Middle-earth in over 25 missions based on all three films. Control one of four unique sides, each with its own playing styles, resource management, and base-building techniques.