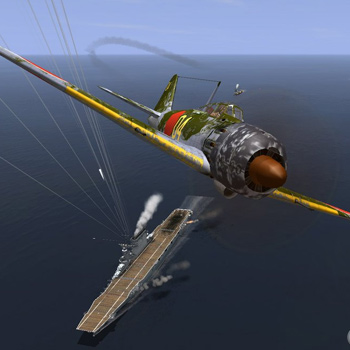 The award-winning flight combat from Oleg Maddoxs IL-2 series moves the setting from the Eastern front to the fierce combat of the Pacific theater. Allied fighters and bombers square off against the notorious air power of the Japanese empire. For the first time, a large variety of British aircraft will be included along with the U.S. and Australia. Target enemy ships, vehicles, airfields, and a host of AI-controlled aircraft. Re-enact some of the most famous air battles of WWII in places like Pearl Harbor, Guadalcanal, and Iwo Jima.

* Fly a variety of WWII Fighters and Bombers.
Fly for the U.S., Japan, Great Britain, and Australia in famous fighters such as the F6F Hellcat, the deadly Japanese Zero, and the UKs Supermarine Seafire. Flyable bombers such as the Aichi D3A1 Val, G4M2 Betty, SBD Dauntless, and A-20 Havoc are also included. Over 40 flyable aircraft models are available.

* Accessible to players of all skill levels.
With its extensive tutorials and customizable settings, the game will be appealing to both beginning and expert pilots. Nearly every level of realism and difficulty can be tuned to fit user tastes.

* Award-winning IL-2-style combat-simulation gameplay.
As with every product in the IL-2 series, Pacific Fighters offers unparalleled attention to detail. The smart AI, unequaled damage model, and sense of realism combine to immerse players like no other combat flight simulation.

* Maps of the most famous battles of the Pacific.
16 new maps are included with famous historical locations such as Midway, Okinawa, Pearl Harbor, and Singapore. Wave movements on the beach, volumetric clouds, and thick vegetation are some of the visual attributes that are rendered in detail.

* Attack a vast array of targets ranging from railroads to battleships.
Ground objects such as trains, trucks, and tanks can all be pounded from the air. Torpedo historically accurate ships, drop parafrags on enemy airfields, and encounter over 100 other targets on the ground and at sea.

* An unsurpassed multiplayer option.
Take part in massive live engagements on huge maps that feature plane formations, numerous ships, and ground troops in a variety of modes from free-for-all dogfights to multiplayer campaigns.