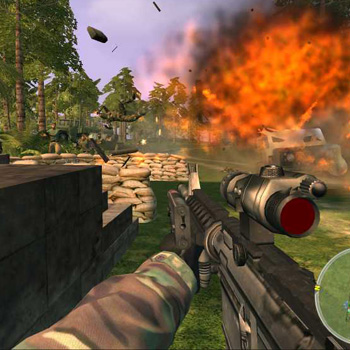 One of the most populated countries in the world is disintegrating. Regional independence movements have acquired advanced weaponry as the nation's military splits into competing factions. Escalating violence threatens innocent civilians and Western economic interests.

The missions are dangerous, the threat is real. Play as either a member of a Joint Force and neutralize the threat... or fight for independence as a well armed separatist. The choice is yours.

BADDER-WAR MACHINES, like the LCAC hovercraft loaded with mechanized troops, lead a team of Black Hawks & AH-6 Little Birds and RAIN HELL FIRE from above as you lay waste to enemy bases. ROLL over the enemy and PULVERIZE their defenses with the remote control cannon on your Stryker attack vehicles.

DEFEND your teammates & OBLITERATE the enemy with 35 MODERN-DAY WEAPONS! Deliver a deadly long range message with a shoulder fired stinger missile, or kick ass at close range with the M4 rifle with the optional M203 grenade launcher.
HUGE unprecedented JUNGLE ENVIRONMENTS! Wage war across maps up 64 square KM, with viewing distances up to 1 Km.
12 TRAINING MISSIONS Learn how to handle weapons, drive vehicles and jungle warfare tactics essential for victory and survival.

5 CLASSES to choose from  Fight as a Rifleman, Engineer, Gunner, Medic or Sniper from one of 7 different countries-- US, UK, France, Germany, Russia, Australia and Indonesia!