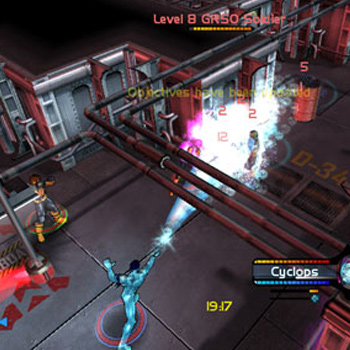 X-Men: Legends is the first game to capture the complete essence of the X-Men by allowing players to control multiple characters that fight together as a team. The game blends the best parts of the movies, comic books in a fantastic new adventure that allows the you to develop your specialized powers as you succeed through your missions. Penned by Man of Action, a studio of comic industry veterans, X-Men: Legends begins with the rescue of a young mutant and takes players through an engrossing plot that could unite mutant-kind, yet destroy the human race in the process.

Along the way, players will be able to assemble their ideal X-Men crew from over 15 of the most popular characters from the last 40 years, including Wolverine, Cyclops, Storm, Nightcrawler, Colossus, Gambit and Beast, to name a few. However, before players load-up their squad with heavy hitters, they will have to take their foes' abilities into consideration as certain situations may benefit from the abilities of specific X-Men. While Cyclops' optic blasts and Colossus' immense strength are great for clearing a path through hordes of enemies, players can opt to bring Wolverine and Nightcrawler along on a stealth intensive mission to help circumvent detection devices.

Once the action begins, players can take control of any member of their squad and even execute multi-character combinations such as the famous Wolverine/Colossus Fastball Special. As they progress through the game, characters will gain experience points that players can use to upgrade the X-Men's abilities and even learn new fighting styles.