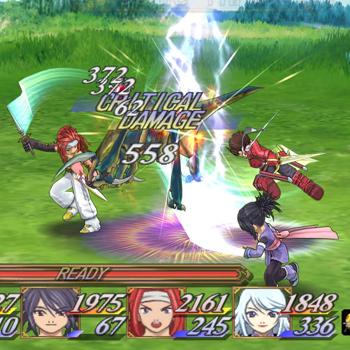 Two worlds exist, unaware of each other. Mana, or life force, is shared by both worlds and while one world thrives, the other suffers.

Lloyd Irving lives on Sylvarant, a dying world where nothing is as it seems - a fact he hasn't yet realized. With a strong set of justice, incredible bravery, and a particular loyalty to his friends, he joins them in a very important quest: a journey to save their world.

Lloyd's close friend, Colette Brunel, is the Chosen One, destined to save the dying world as a descendant of the Mana bloodline. At the age of 16, the weight of the world hangs on her shoulders.

Genis Sage, the village intellectual, is a talented magician with a personality to die - or kill - for. Most likely, you'll grow to love him.

Together, they set on this dangerous journey together - to unlock the seals of the world and bring the balance back to their dying town on Sylvarant.

Battles are fought in real-time on a 3D battlefield. Once in a battle, you can switch which character in your battle party you want to control. (Different characters have different strengths -- magic, physical attacks, etc., so pick the one that best suits your fighting style or your enemy.) You can then target any enemy on the battle field and attack.

Any characters that are not being controlled manually are controlled by the AI, but the player can issue orders to the party (such as go all out, don't use magic, fall back and regroup, etc.) in real-time as well as set each individual character's AI pattern (such as attacking flying enemies first, standing back and healing injured party members, etc.). The player can also set up shortcut "hotkey" commands which will make a specific party member stop what they are doing and execute a specific attack or spell right then and there. This can help the player-controlled character create some pretty long and nifty combos with the computer-controlled characters.

Multi-player is easy to set up; just plug in a controller anytime and set the character control to manual in the Tech menu. Each Controller Socket corresponds to a character in battle.