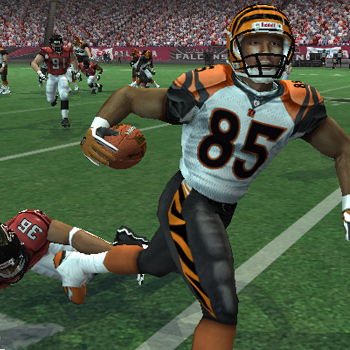 Force the action on defense in Madden NFL 2005. New defensive tools allow you to make more plays and be in on all of the action. The all-new Hit Stick lets you lay the big hit to turn the momentum of the game in your favor. Modify pre-snap assignments, including double teams and player-specific match ups, for any defensive player on the field.

With the new Storyline Central, you get the inside scoop around the league from radio host Tony Bruno, along with local and national newspapers, to help you make critical franchise decisions.

New Hit Stick  Change the momentum of a game by using the right analog stick to make a huge hit, force a turnover, and send the crowd into a frenzy. Time it just right or you'll get burned for a big play. Enhanced Franchise Mode  Players now react to everything that happens in the franchisereward a hard-working player by naming him team captain or trade away unhappy players.

The new game-by-game progression system rewards players for their performance during the season. Your team's crowd is now customizable with new Create-a-Fan. Be on the lookout for team-specific super fans via all-new 3D fan scenes.