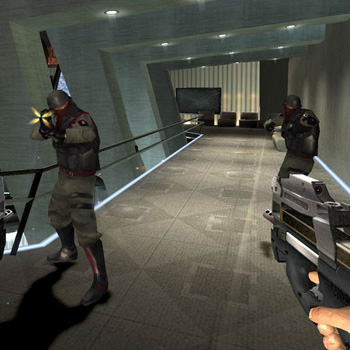 GoldenEye: Rogue Agent is a first-person shooter that breaks all the rules by transporting players to the dark side of the Bond universe to experience life as a high-rolling, cold-hearted villain. As an aspiring 00 agent dismissed from MI6 for reckless brutality, you are hired as an enforcer by Auric Goldfinger, the wealthy super-villain with a lust for all things gold. Goldfinger is locked in a ruthless war against his archenemy, the brilliant scientist Dr. No. The prize is control of the worlds greatest criminal organization. A brutal encounter with Dr. No costs the player an eye, but Goldfingers technicians replace it with a gold-hued, synthetic eye, earning the player the name GoldenEye. Players have the ability to customize and upgrade their villain persona and wreak havoc as they make their unrelenting rise through the ranks.