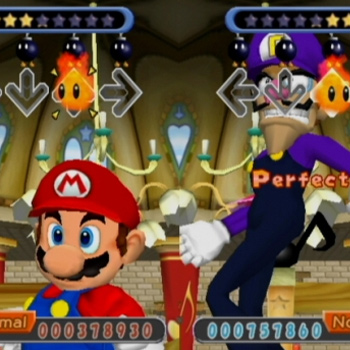 After a decade of successful coin-op hits and many years of PlayStation-exclusive (and later, Xbox) home releases, Konami's genre-founding Dance Dance Revolution series comes to a North American Nintendo console for the first time, hosted by a cast of favorite franchise characters. As in earlier versions of DRR, Mario Mix players interact with the game through a floor mat controller, and are challenged to step to the beat of a song while following a succession of directional prompts that scroll up the screen. The game's soundtrack features over two dozen songs, including both pop hits and reworked themes from classic Nintendo games. Five levels of difficulty are available and, as in earlier editions, DDR: Mario Mix also features a "Workout" mode, which estimates the number of calories a player burns while dancing.