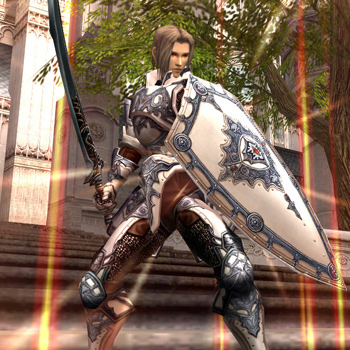 Lineage II is designed to offer far more character customization options than its predecessor. In designing an avatar, the player chooses gender, race, basic attributes, a name, and decides whether the character will specialize in physical combat or magic use. More specific classes and skills are determined gradually, as the character gains experience and levels up. Player characters can be humans, elves, dark elves, orcs, or dwarves, each race with its own in-game culture and home starting city. Appearances change dynamically depending on the clothing, armor, and weapons a character has equipped. Pieces of armor exist as separate polygonal objects, and can change not only the color and texture but the physical profile of the characters who wear them.

While much has been improved over the original, Lineage's most popular and distinguishing features return in Lineage II. Despite the 3D presentation of the sequel's online world, character actions are controlled through a straightforward point-and-click interface, as in the earlier games. The blood-pledge system continues to encourage characters to organize themselves into clans, providing a sense of social structure for newer players as well as challenging leadership opportunities for higher level heroes. Castle sieges also remain an important part of play, culminating in intense, drawn out battles between scores of organized, human-controlled opponents.