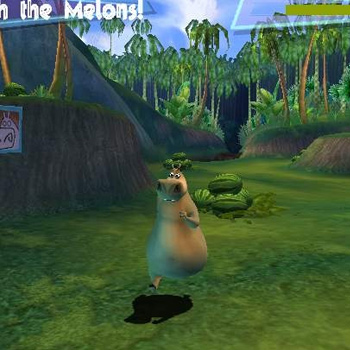 This 2D platform puzzle game is based on the DreamWorks film of the same title and release time. Players take control of four unlikely animal companions: Alex, the brave lion; Marty, the idealistic zebra; Melman, the hypochondriac giraffe; and Gloria, the heavyweight hippo. The animals have joined forces to try to escape from their current confinement in the Central Park Zoo. Each creature has a special skill, and finding the best use for these abilities can be key to making it through each zoo-based level. The animals abilities become more powerful as players progress, and between-level mini-games feature supporting characters from the film, such as the penguins and the lemurs.