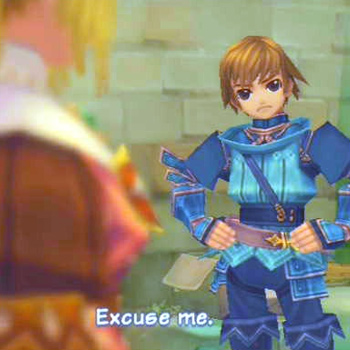 Radiata Stories is a fantasy role-playing game. It was developed by tri-Ace and published by Square Enix for the PlayStation 2. It was released on January 27, 2005 in Japan and September 6, 2005 in North America.

The latest fantasy RPG by tri-Ace, developers of "Valkyrie Profile" and the "Star Ocean" series. An emotional story about the conflict between humans and fairy creatures is complemented by a new gameplay system that draws the player deep into the game. The kingdom of Radiata lies in a world where humans and fairy creatures coexist. It is here that the protagonists, Jack and Ridley, meet for the first time. While Jack seeks to become a knight, Ridley must accept her fate in becoming one. Destinies are realized when a war erupts between the humans and the fairy creatures and threatens to end the world of Radiata.

The popular traditional real-time battle system known for its straightforward controls and extravagant presentation has a new element. By forming a "link" attack, the player can execute combos and other moves with all party members joining as one. There are over 150 characters that Jack can recruit throughout his adventure. It is up to the player whether they journey alone or seek out others to journey with. Every playable character is beneficial in some way.