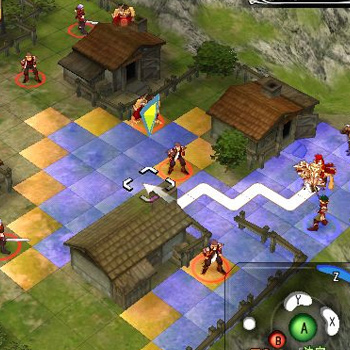 This edition of Fire Emblem is a console-style, tactical RPG developed for play on GameCube. Players lead a powerful, loyal, diverse band of mercenaries, and fight to bring peace to a war-torn fantasy realm called Tellius. The game is played across true 3D battlefields, which give added importance to considerations such as height and cover. Quick cut-scenes add drama when two characters face off in a head-to-head fight. As the player's characters progress through the story, they can be custom-developed with new skills and equipment. Though less familiar to some American console gamers, the Fire Emblem series has been popular in its native land of Japan since its early-'90s debut on Famicom (NES). Developer Intelligent Systems is best known to many American gamers as the creator of the GBA's acclaimed Advance Wars games, as well as the handheld's 2003 version of Fire Emblem.