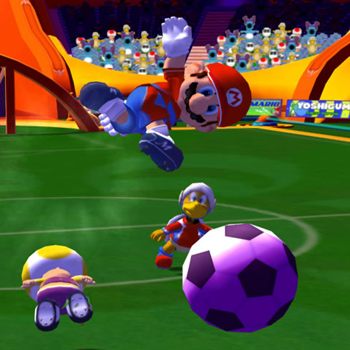 Super Mario Strikers, known as Mario Smash Football in Europe and Australia, is a five-a-side football game developed by Next Level Games for the Nintendo GameCube. The game was released in Europe and North America in late 2005, and in Japan and Australia in 2006.

Super Mario Strikers is a sports game game incorporating characters and themes from the Mario series. The game features the basic aspects and objectives of a football game, although no referees are present and characters can legitimately shove others out of possession of the ball. As in other games such as Mario Power Tennis, the player can use Mario-themed items such as bananas and red shells to hinder the opposition and gain the advantage. Each team's captain can also use "Super Strikes" that, if timed accurately, will result in two points scored for the striker's team. Each team comprises a goal keeper, a main Mario character (captain), and three of the same secondary Mario characters known as "side kicks."