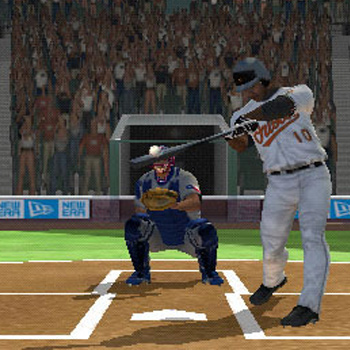 Sony steps back up to sports game publishing plate and swings for the fences with this first-party pro baseball game for PS2, offering a slew of improvements and new features over the previous year's game. MLB 2006 features all the Major League Baseball teams and players, based the most current (2003-2004) season at its time of release. It also offers select AA and AAA minor league teams, as well as unlockable "Silver" and "Golden" age stars, such as Babe Ruth and Lou Gehrig. The revamped Career Mode gives gamers the perspective of a pro player, who starts in the minors and labors his way up to star in the show. The franchise mode has been redesigned as well, to in include a more intuitive interface and a new morale system. Virtual managers will need to account for their teams' spirit and attitude, as the morale system is designed to simulate the resentment some players might harbor if they feel they aren't getting enough playing time, or are placed at the wrong place in the battering order. Of course, streaks, slumps, trade rumors, and other factors can also affect player morale.