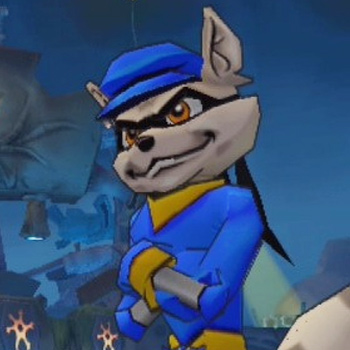 Sly 3: Honor Among Thieves entices a broad range of players with multiple tiers of gameplay to reach both the hard core and gaming novice, drawing players immediately into the devious adventures of Sly and his crew by offering a unique cast of playable characters, a challenging dual analog stick multiplayer mode, new vehicles, mini-games, disguises, enhanced combat move sets and much more.

Players hungry for a more in-depth gameplay experience have the opportunity to replay missions by utilizing the time machine feature, thus providing an opportunity to sneak around an environment again using alternative moves and disguises in order to achieve even higher Master Thief ratings. In the new multiplayer mode, players play head-to-head and experience cooperative missions or replay mini-games together.

The story line for Sly 3: Honor Among Thieves begins with Sly and his crew in disarray and struggling some setbacks. Bentley was crippled in the final battle with Clockwerk at the end of "Sly 2: Band of Thieves" and confined to a wheelchair, and Murray, feeling responsible for Bentley's tragic accident, has quit the team and chosen a path of non-violence and solace. Meanwhile, Sly learns of a secret family fortress that houses the amassed Cooper family fortune. Upon arriving at this hidden location, Sly discovers another enemy group attempting to steal the Cooper fortune. Sly and Bentley quickly realize they will need considerable help to defeat this new rival. Their recruiting starts with Murray, and once back on-board, Sly, Murray and Bentley set out to enlist some new and familiar faces in an effort to pull off a World Class heist.