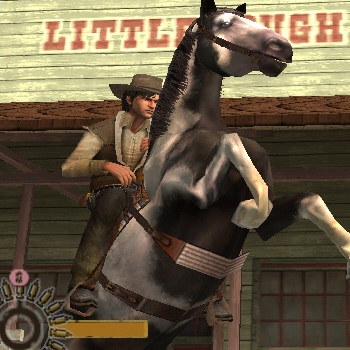 Designed to present grown-up gamers with a well-rounded cowboy adventure, Gun tells a classic Western story of revenge and rugged individualism, with the player in the starring role. Colton White was robbed of his heritage by a lifetime of lies; now he aims to take charge of his destiny and become his own man. The game's open-ended mission structure and expansive environments allow players to explore the frontier as they choose. Missions offer a variety of gameplay styles, including stealth action, precision shooting, and horseback riding.

Players can develop Colton White to be an upstanding, classic hero, who protects the innocent and follows a code of righteousness, or a vengeful loner, who best serves the frontier community by serving himself first. The game's story progresses through a series of major missions, but many side-quests allow the hero to develop skills and earn scratch. Money and other crucial resources can be gained by collecting bounties, winning at the poker table, or by less civically upstanding means.