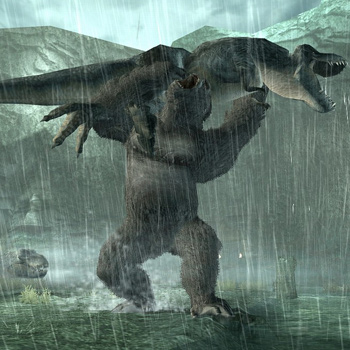 Peter Jackson's King Kong: The Official Game of the Movie is a first person shooter action adventure game based on the 2005 film King Kong. It is a collaboration between the film's director Peter Jackson and famed videogame designer Michel Ancel (Rayman, Beyond Good & Evil).

Play as man or beast in Peter Jackson's King Kong: The Official Game of the Movie. You can be King Kong or Jack Driscoll as you follow a story based on the movie. Peter Jackson, the director of the 2005 movie, also took an active role in developing the game, which expands upon the movie's storyline, adding new creatures and locations. The game employs a cinematic style that makes the game more immersive and less like a traditional video game.

- Survive as Jack in a world crawling with predators and live the legend as Kong.
- Use weapons, traps, and your team wisely to survive in first-person as Jack.
- Break jaws, slam enemies, and throw massive objects in Kong's colossal third-person battles.