Rise of the Kasai 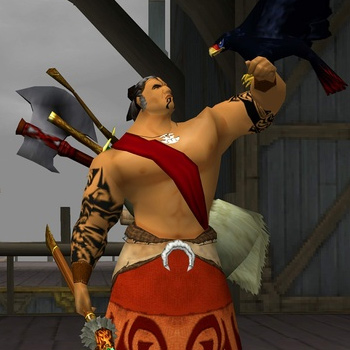 The sequel to the highly acclaimed "The Mark of Kri" offers gamers artistically stylized gameplay filled with magic and mysterious spells, an innovative fighting mechanic, and online compatibility with intense collaborative combat action. The main hero, Rau, and his trusted spirit guide, Kuzo, return for the sequel along with new, stylized characters, including Tati (Rau's younger, agile sister with a darker personality).

Building on the proprietary combat system, two players will be able to team up (online) with the USB headset and defeat enemies together or play alone using an AI (artificial intelligence) controlled character for a unique cooperative gameplay experience. If playing alone, the second character is controlled by artificial intelligence and a cunning player will observe their actions to learn how to best approach the fighting scenarios when replaying the area as the opposite character. Rau has four weapons in his arsenal: battle axe, Taiaha (spear), broadsword and bow and arrow that now acts as a stealth weapon. Tati has twin daggers, a deadly staff with retracting blades, an axe, a proximity-based weapon and the ability to become invisible in stealth mode.

Each character has his/her special skills that can be developed along the way. While Rau is able to use Kuzo the bird to scout unknown territory, distract enemies and retrieve items, Tati can "spirit walk" and see through the eyes of the dead. Tati also has the ability to blend seamlessly into the environment and wait undetected, furthering the strategic element of the gameplay. Satisfaction of ending a level is now by way of defeating a boss. Three imposing bosses will make full use of the "Mark of Kri" cinematic approach.