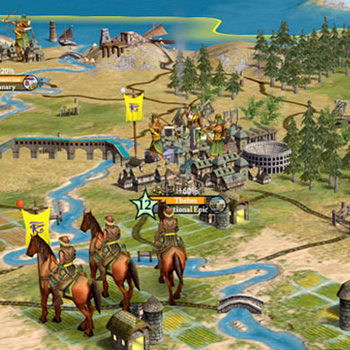 Civilization IV features gorgeous 3D graphics, loads of in-game movies, brilliant audio and music, and, most importantly, the best and most addictive gameplay of any strategy game ever created. As a matter of fact, Time magazine has named Civ IV one of the hottest new games this year!

Sid Meier's Civilization is a turn-based strategy game that challenges players to build and expand an empire, throughout all of human history, and become the most powerful ruler in the world. Choose one of 18 nations to lead and go head to head with some of the most famous leaders in history. Each civilization has its own special characteristics - some are fairly peaceful, while others are expansionists and conquerors. You'll battle your foes with a huge arsenal of weapons, beginning with primitive archers and warriors, then catapults, knights and frigates, and eventually with modern tanks, submarines, mobile infantry, helicopter gunships, stealth bombers, and nuclear weapons. However, Civilization IV is more than just a great combat game: you can also achieve victory through diplomatic cunning, cultural or religious alliances, and technological dominance.

Civilization IV delivers faster mid and late game AI turns, and offers greater control over your civilization's government and religions, while at the same time de-emphasizing the less fun micromanagement (cleaning up pollution, for example). And there's more! Civ IV has been designed from the ground-up to deliver fantastic multiplayer gaming options, as well as unprecedented modding tools - allowing you to create new units, game maps, scenarios, and even entire new civilizations!