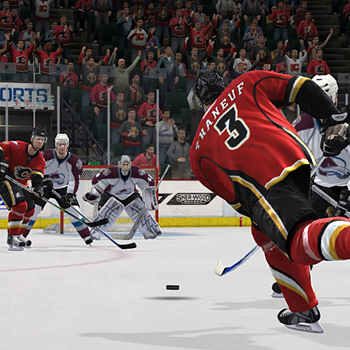 NHL 09 builds on the momentum of last year, with innovative controls, added depth and new features designed to help newcomers jump into the series. The Skill Stick System evolves to bring an unparalleled level of control to the defensive side of the puck. The all new Defensive Skill Stick gives you the ability to sweep your stick to block passing lanes and lift an opponent's stick to prevent one-timers. Take your game online with 6 vs.6 team play, where 12 people can play together on 12 different consoles around the world. With new teams from the Russian, Czech Republic and German Elite leagues, NHL 09 connects hockey fans around the globe like never before. Players new to the series can now shoot, pass and check with ease. NHL 09 features Be A Pro, a game mode that puts you on the ice with a dynamic new 3rd person camera that allows you to play the role of one player. With a performance tracker grading your progress in more than 50 categories, you know exactly where you need to improve to become the next NHL superstar. [Electronic Arts]