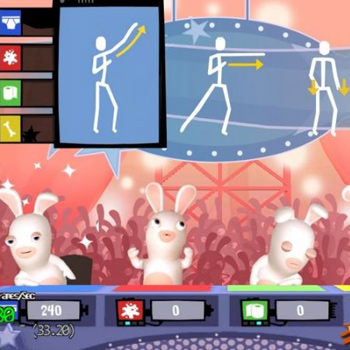 Ubisoft's dim-witted, unhinged rabbits are back for more madcap mini-game merriment in Rayman Raving Rabbids: TV Party. Once again Wii owners will partake in themed activities that poke fun at television, movies, and other aspects of pop culture. New to this installment is support for the Wii Balance Board in addition to the system's standard motion-driven controls. Players will sit on the board to race on a snow-capped mountain, stand on it to mimic exercise poses, go surfing in space, and more. Those without a Wii Balance Board won't have to miss out, as the accessory is optional.

Other activities range from a Tetris-variant, where the Wii Remote is used to bend Rabbids into shapes, and a dancing rhythm game that involves following onscreen cues to songs like "ABC," "Jungle Boogie," and "Ladies Night." Also included are first-person shooting stages inspired by the film, Night of the Living Dead. Four players can compete simultaneously, and up to eight are supported in a special turn-based mode. More than 50 mini-games are available across seven channels, from Trash TV and Extreme Sports to Macho TV and Cult Cinema.