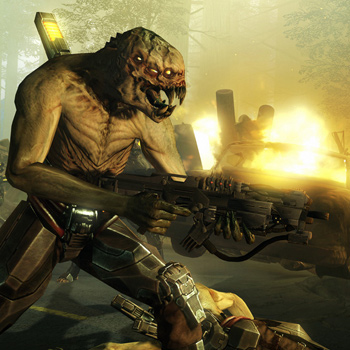 Humanity continues its heroic struggle against the hideous Chimera in this follow-up to the PlayStation 3's top-selling launch title. Taking place two years after the events from the first game, Resistance 2 has you controlling Nathan Hale as the war campaign moves from England to the United States. The setting is an alternate 1953 America, a landscape ravaged by war and alien occupation. Fight alongside a group of super-soldiers called the Sentinels and attempt to stave off the effects of the Chimeran virus surging through your bloodstream. The enemy is now equipped with deadly new weapons in addition to modified armaments from the first game.

Game types include a solo campaign, cooperative play, and online warfare for up to 60 players simultaneously. The co-op option features a distinct storyline parallel to the main campaign and includes support for up to eight players. It also offers a choice of three character classes: medic, soldier, and special ops. In addition to possessing special attributes, each class can earn experience in combat. New equipment and armor can be unlocked by achieving certain level milestones. The online component features improvements over the first game, with new social networking tools and an open invite system bolstering such multiplayer mainstays as skill-oriented matchmaking, stat tracking, and dedicated servers.