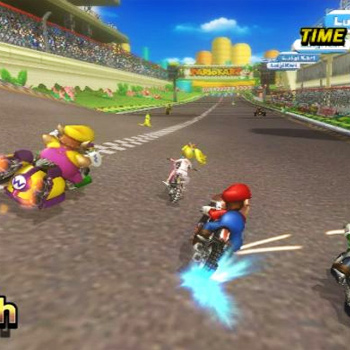 Mario Kart Wii comes with the intuitive Wii Wheel, which makes it easy for novices to compete against veterans, so no one is left in the dust. And with a broadband hookup to Nintendo Wi-Fi Connection, players can compete with up to 11 other drivers from around the world for racing dominance. The game includes 16 new courses and 16 classic courses from previous Mario Kart games. For the first time ever, players have the option of racing with either karts or motorbikes. Players can also hit the road as their personalized Mii caricatures in addition to the handful of classic Nintendo characters found in the game. True to the series, the game features tons of racing, plenty of power-ups and oodles of objects for players to use to slow down other drivers. And 10 battle arenas keep players busy between trips around the circuit. Mario Kart Wii supports four different control options: Wii Remote with or without the Wii Wheel, Wii Remote and Nunchuk controller combo, Classic Controller and even the Nintendo GameCube controller. So there's bound to be a configuration that fits everyone's style. Mario Kart Wii launches with a new channel added to the Wii Menu to enhance game play: The Mario Kart Wii Channel. This new channel builds on the online community of Wii owners and lets players compete in tournaments, check worldwide rankings, see when their friends are playing and download ghost data. [Nintendo]