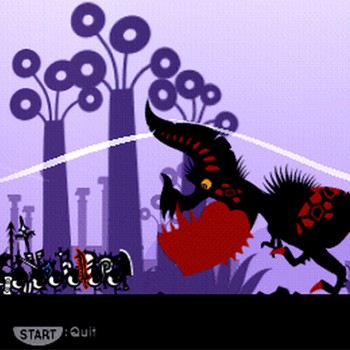 For years the Patapon tribe has lived in the desolate frontier, driven from their home by the evil Zigoton army. Behind the Patapons' cute exterior, lies a fierce warrior spirit that can only be commanded by the beat of their Gods war drum. They wait for the day that the "Almighty" will return, to lead them against their enemies and bring them back to their homeland. Finally, their wait has come to an end as the drums of war are heard once again. Rhythm and Action Collide  Master up to six different drumbeats to command the Patapon troops to march, attack, defend, power up, retreat, and use magic. Combine the various chains of drumbeats to address each unique level, leading the Patapons to victory over the Zigoton enemy forces. Strategic Gaming  Patapon delivers a strong element of strategy by requiring players to properly customize and build up the Patapon army, arm each soldier with particular weapons and armor, and position them correctly for battle. Mission Variety  Take part in more than 30 specific missions including hunting, escort, and boss battles, and explore numerous vivid environments along the way. Players will discover and access more than 100 items and weapons throughout the adventure. Unique Art Style  French graphic artist Rolito, noted for his abstract art style seen in collectible toys, animation, and websites, lends his skills to create a variety of unique characters and environments, bringing the Patapon world to life. Mini-Games  Five music-based mini-games allow players to earn bonuses and upgrades to further customize the Patapon warriors. Music  Captivating and dramatic original music builds dynamically as players march and encounter enemy battles throughout each level.