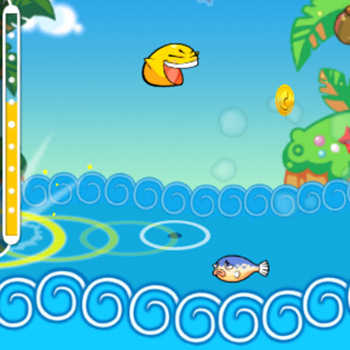 Skipping Stone is a Puzzle game, developed by Gamevil and published by I-Play, which was released in 2005.

Skipping Stone captures those lazy summer afternoons spent skimming pebbles across twinkling waters. The first step during gameplay is to get the pitch right. The strength of the throw is governed by a power gauge that whizzes up and down, requiring deft timing to achieve a full-bodied lob. Next, just press the fire button every time the stone hits a sweet spot on the surface of the water--if you miss the spot, your power gauge drains and the bounce height reduces. When the gauge reaches zero, the pebble sinks, and it's game over. The longer you keep the stone skipping, the higher your score.

Skipping Stone's brash graphics and simple (yet seductive) gameplay make it a title of WarioWare-esque vivacity. Although anyone can pick it up and appreciate it, the game's exquisite balancing provides the depth to reward more experienced gamers.

If you've been charmed by WarioWare, or older cult classics like Bishi Bashi Special, you're in for an idiosyncratic treat here.