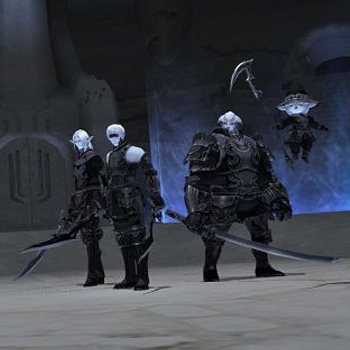 This bundle from Square-Enix includes the full version of the online RPG Final Fantasy XI (updated to the latest version at the time of release to include the "Rise of the Zilart" addition and the "Tetra Master" mini-game) along with the game's first retail expansion pack, Chains of Promathia. A month worth of subscription time is also included in the package.

The Final Fantasy series enters the realm of online multiplayer gaming with Final Fantasy XI. Vana'diel features three nations teetering on the edge of war. Hordes of beastmen are threatening all three nations, and parties of adventurers are joining forces against them. But Vana'diel is also full of powerful crystals waiting to be crafted in beautiful items, minerals to be mined, friends to meet, and stories to discover. Beginning characters choose from three nationalities, five races, six classes, a variety of body types, and custom faces. As characters experience, the choice of available jobs increases.

Chains of Promathia adds new weapons, armor, and in-game items, as well as two large new areas to explore. Characters who have reached level 20 may consider traveling to the Tavnazian Archipelago, a group of war-torn islands where once there was a populous peninsula. The expansion's other new area, Movalpolos, is a subterranean city populated by an unusually stable community of goblins known as Moblins.