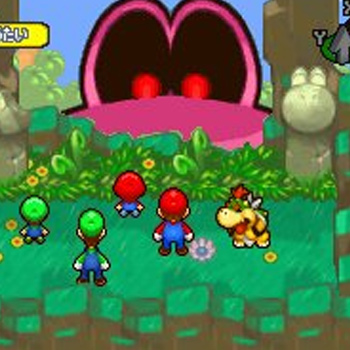 Partners in Time is a DS sequel to 2003's Mario & Luigi: Superstar Saga for GBA. Once again, the platforming plumber brothers team up to take down a slew of Mushroom Kingdom miscreants, though action-RPG-style play. In this game, they will also twist time to team up with themselves -- at a much younger age. Special battle sequences allow Mario, Luigi, Baby Mario, and Baby Luigi to join together to pull off special four-plumber tours de force. In addition to the fighting, the game features conversation and exploration. The main action occurs in the upper screen, while the lower screen displays maps and other useful information.