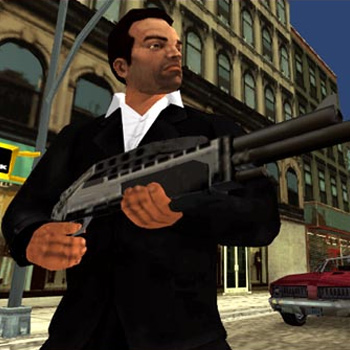 The first Grand Theft Auto game to hit the streets on PSP, Liberty City Stories follows in the tire tracks of the series' 2002 breakthrough hit. As in the PS2's Grand Theft Auto III, the three island boroughs of Liberty City are the setting for this portable game of violence, speed, and free-form criminality. Players take the role of a new character, however; another up-and-coming thug who follows a fresh underworld adventure to infamy, through a series of loosely related missions. Of course, as in the other contemporary GTA games, players are also free to explore the expansive, interactive game world on their own, participating in side-challenges or simply stirring up trouble however they see fit. Sprawling city streets are full of ineffectual police, cash-carrying pedestrians, and cars of a wide variety of fictional makes and models, all there for the taking. Also in line with series tradition, the game's soundtrack comes in the form of satirical radio stations which are available in any car, each featuring a long list of licensed music.