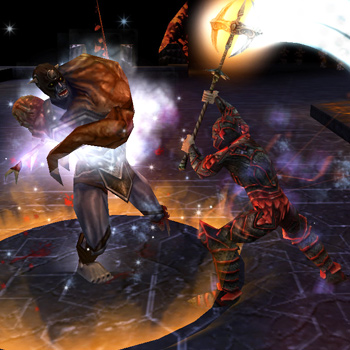 In Dungeon Siege II players return to land of Aranna, to take the role of a simple mercenary who is forced to take up arms for a higher cause -- the defense of humanity itself. This hero may eventually be joined by up to five other adventurers. Together, the party travels the land to save it from an almost certain doom. Players have more choices as they develop their characters in the sequel, choosing from a selection of new hero powers instead of automatically building up the most-used skills. These new abilities are designed to give them a fighting chance against the sequel's more powerful enemies, which are directed by improved artificial intelligence. Many other favorite features from the original are reprised and enhanced in Dungeon Siege II as well. The pack mule is once again available, to help heroes haul their loot, but the party can also choose from other available support creatures, both magical and mundane, each offering distinct benefits.

The plot of Dungeon Siege II involves legends of an ancient time, when primordial magic was first unleashed in the world, through a deadly struggle between old, near-forgotten gods. Now it seems that an heir to these old gods is awakening, and soon may reclaim the errant magic of the world for itself, using it to destroy any who would stand in the way of its conquest. Storytelling elements are more prominent in the sequel, as player characters encounter lore-laden NPCs, important landmarks, and many other opportunities to learn about the culture and history of the fantasy world. However, the main focus of Dungeon Siege II remains on the efficient, fast-paced, hack-and-slash combat that won many fans for the original game.

Gas Powered Games head Chris Taylor is known for creating games that refine established playing styles while revolutionizing technical presentation. His work at Cavedog Entertainment was instrumental in producing Total Annihilation, generally considered to be the first fully 3D real-time strategy game, and Gas Powered Games' original Dungeon Siege placed familiar, Diablo-style isometric action role-playing in a 3D game world brought to life with graphics of an unrivaled quality for their time. Dungeon Siege II is intended to continue this custom. Along with the classically styled gameplay and new features it offers, the sequel runs on an advanced version of the game engine that's designed to produce contemporarily cutting-edge graphics and fluid, in-game cut scenes.