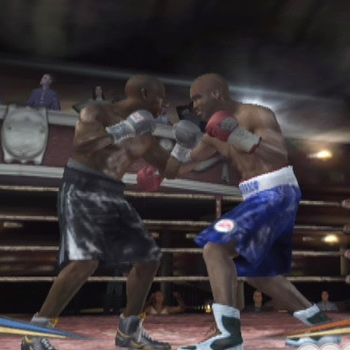 The analog control punch system introduced in EA Sports' original Fight Night gave gamers a whole new way to do battle in the virtual squared circle, and this follow-up game aims to refine that system while offering more control over the boxers in the ring. The sequel is designed to make it easier to move a fighter around the canvas, allowing for realistic blocks, dodges, and stick-and-moves; clinching is now possible as well. Players can determine the type of punch they'll throw in Round 2, whether a quick, light jab or a slow, hard wallop. Round 2's "Haymaker" feature lets fighters deliver a true, one-punch knock-out blow -- if they're brave enough to leave themselves open as they wind up (and also confident in their ability to connect with their opponent, to avoid an onslaught of ruthless counterpunches).

As in the first game, damage dealt in the ring is reflected immediately in the boxers' appearance, and injured fighters may have trouble performing at their best. Between rounds, players can now take control of the cut man, to make sure wounds are properly tended and no one has to throw in the towel. The game's Create-a-Champ system returns, with additional options available to customize characters. Boxer characters can head to the gym and lift weights to add muscle, or practice footwork to become leaner and quicker. Nearly all of the professional fighters featured in the original return in this second version, joined by newcomers Diego Corrales, Miguel Cotto, Ricky Hatton, Juan Lazcano, Floyd Mayweather Jr., and Manny Pacquiao. Ringside commentary is delivered by Joe Tessitore, known to many boxing fans for his work on ESPN.