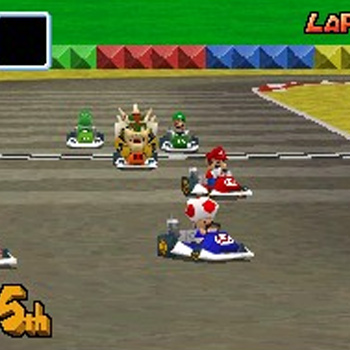 The series that first taught gamers to "kart" race speeds online in its DS debut. As in the popular SNES, N64, and GBA versions of Mario Kart, players choose a favorite character from the Nintendo canon and compete in chaotic, anything-goes races around variety of Mushroom Kingdom-themed tracks.

Each character comes with his or her own custom go-kart, and offers a different mix of speed, pick-up, and strength. Adding to the excitement are an assortment of power-ups, such as high-speed boosts, slippery banana peels, and ricocheting shells, which when used properly (and with a little luck), can knock a front-runner off the track or launch a last-place racer into first.

New in the DS version of Mario Kart is an online multiplayer mode, designed to be accessible through a proprietary DS-to-DS wi-fi connection (for as many as eight) or a wireless connection to the Internet (for up to four).