Brothers in Arms: Earned in Blood 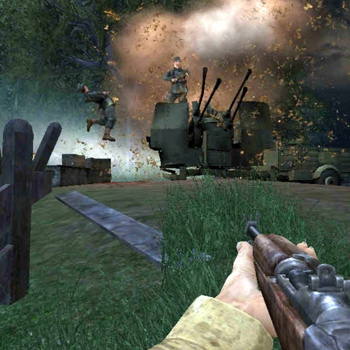 The first follow-up to Road to Hill 30 returns players to World War II, in the new role of U.S. Army Sergeant Joe "Red" Hartsock. Players will witness the D-day invasion at Normandy first-hand, thorugh Hartsock's eyes, before pressing forward to Carentan and beyond. Once again, the game calls on virtual squad leaders to organize the men beneath them to operate as a team; instead of hell-bent running and gunning, soldiers must work together to recon their surroundings, provide cover fire, and pin down the enemy, before they move in for the final kill. This teamwork is well served by a sense of camaraderie, which can be developed through the game's RPG-style aspects.

Aside from the setting and characters, new features in Brothers in Arms: Earned in Blood include weapons such as the M3 "grease gun" and vehicles like the M10 "Wolverine" Tank Destroyer. The enemy has access to new resources as well, however, and refined enemy A.I. is designed to pose at least a much a challenge as in Road to Hill 30. Earned in Blood also introduces a same-screen cooperative mode and expanded online multiplayer support. As in the development of the first Brothers in Arms game, developer Gearbox elicited input from real-life veterans, including Airborne Ranger Col. John Antal, in its effort to create a historically accurate World War II setting.