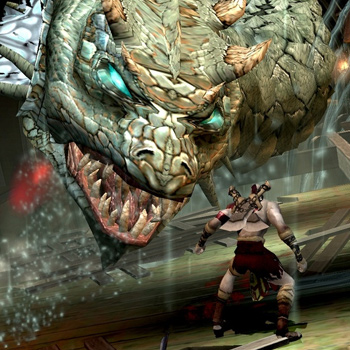 In God of War, you play as the mortal warrior Kratos, a muscular Spartan warrior who is on a mission from the gods of Olympus. Ares, the god of war, has attacked the mighty city of Athens. Athena, who cannot fight Ares as Zeus has forbidden gods to fight amongst themselves, has asked Kratos to acquire Pandora's Box, a powerful item that frightens the gods themselves. If Kratos can find Pandora's Box, he can save Athens, and kill the god of war.

Kratos has two default swords that he will always carry with him called the Blades of Chaos. They allow you to perform combos, which will constantly climb until you can no longer fight (you've killed everyone in the area), or you take too long to register another hit. The higher your combo total, the more red orbs you get from defeated enemies.