The Incredibles: Escape from Nomanisan Island 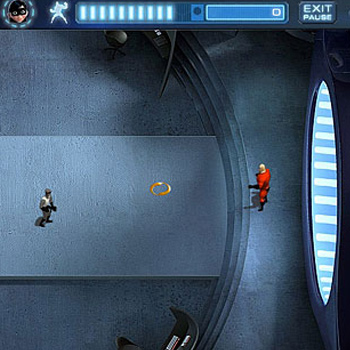 The game features Mr. and Mrs. Incredible and their kids, Violet and Dash, the superhero stars of the blockbuster The Incredibles, as they try to escape Nomanisan Island while facing wave after wave of the evil forces of their foe, Syndrome. Fans are invited to download the game to test their superpowers in four environments and 20 levels of non-stop game action.
Players can get a free trial and purchase the game for USD 19.95 by following the download tab above.

The Incredibles downloadable game shares many of the film's settings and begins with an escape from Syndrome's secret base on Nomanisan Island. Play continues as the family battles through the dark caverns of a volcano, the thick of an untamed jungle and along rocky beaches before ultimately facing Syndrome himself.

Players can switch characters at any point in the game, optimizing their powers for rapidly changing game challenges and differing opponents. Mr. Incredible features a powerful boulder throw. Mrs. Incredible packs her signature stretch punch. Dash pelts enemies with a rapid-fire rock throw and Violet uses her force field to protect her family from harm.