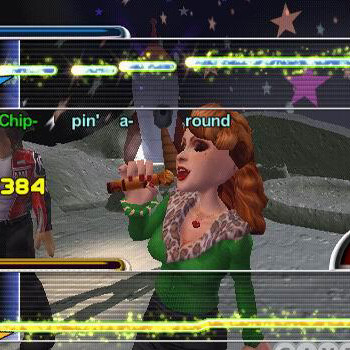 In response to popular demand, Karaoke Revolution 3 will let karaoke crooners sing with - and compete against - friends with the addition of duel microphone support and exciting new modes for two mic gameplay. In addition, Karaoke Revolution Volume 3 includes more than 35 new songs. Duets mode lets aspiring pop stars play as a team and shoot for high scores by singing along to classic karaoke duet tunes such as "Under Pressure," "Love Shack" and "Ain't No Mountain High Enough." Players can even practice their separate parts and learn how to harmonize with each other to achieve the perfect score. For some friendly competition, two players can square off and take turns singing every other phrase in a song while joining together during the chorus in Sing-Off mode. The player with the most points at the end of the track wins. Knockout mode offers the fiercest karaoke battle yet, pitting players against each other while singing the same song in unison. A battle meter keeps track of the gamers' progress and when it fills up for one player, the other is knocked out! The collection of well-known tunes includes "Beat It," "Killing Me Softly," "New York, New York" and "You're The One That I Want."