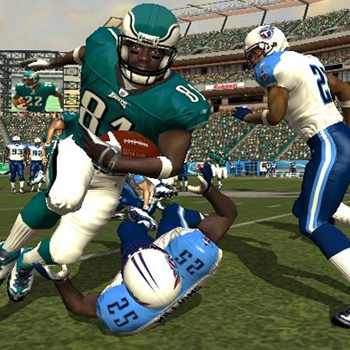 To start off, the ESPN presentation has been greatly expanded. Chris Berman, who did voiceover for the half-time show in 2K4, returns for this season. Instead of just voice, there is a virtual Chris Berman, who does an introduction to each game, a half-time report, and a post-game show. To illiustrate certain points, he uses replays from each game. Every move you pull off of every quarter of every game is saved and used in these replays (Xbox only). Suzy Kobler gives reports from the sideline.

One new feature is the V.I.P. system, which keeps track of how you play the game. If you pass 80% of the time, and run 20% of the time, your V.I.P. profile will reflect this. At a later time, you can play against your V.I.P., and the AI will play as if it were you.

ESPN celebrates it's 25th anniversary this year, and as such, a special 25th Anniversary Mode has been added. This mode allows you to play moments from classic football games, including The Heidi Bowl and The Immaculate Reception.

The Crib has an overhaul this year. Instead of earning specific items by completing tasks, you earn points, which you can use to buy items of your choice. New to the Crib is a dart board, as well as a phone, which you will use to answer calls from celebrities. You may get a call from Steve-O, Carmen Electra, Jamie Kennedy, David Arquette or Funkmaster Flex, challenging you to a game.

Franchise mode also gets an overhaul. New to 2005 is the ability to schedule weekly preps for your team. You can choose to have players work out, play practice games, watch tapes, all in an effort to gear your team up for the next game.

ESPN NFL 2K5 can be played over Xbox Live, with future support for leagues. The game is also "always connected", as long as you have an internet connection. This allows it to keep buddy lists up to date, see friends, receive requests, all the time, whether you're actually playing an online game or not. Roster updates will be available in the future.