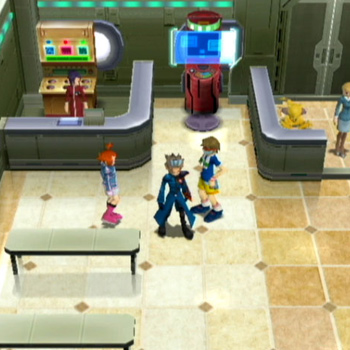 Pokémon Colosseum is a role-playing video game developed by Genius Sonority and published by Nintendo as part of the Pokémon series. It was released exclusively for the Nintendo GameCube on November 21, 2003 in Japan; March 22, 2004 in North America; and May 14 in Europe. Unlike previous titles, the game does not feature random encounters with Pokémon, but the player can steal ("Snag") the Pokémon of other Pokémon Trainers. The game also features several battle modes for single-player and multiplayer gameplay.

Pokémon fans can now battle their favorite Pokémon on the grand stage. Starring a brand new leading character, Pokémon, Colosseum offers a story mode that pits you against tough trainers who routinely catch damaged Pokémon. In Battle mode, you can use the Game Boy Advance cable to send your team from your Pokémon Ruby or Pokémon Sapphire Game Pak to your Gamecube, then witness the true potential of your team. Rescue Pokémon and watch them come to life in spectacular Colosseum battles.