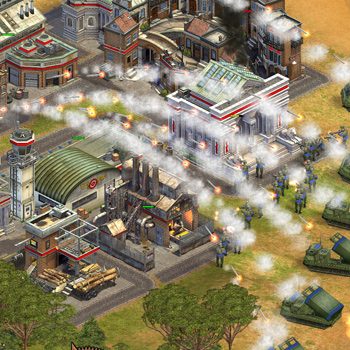 Dominate 6,000 years of history from the Ancient Age to the Information Age. Which forces will you deploy to lead your nation to global prominence? Trade, espionage, diplomacywar? Whichever path you choose, youll experience the pulse pounding thrill and speed of real-time gaming combined with the epic scope and depth of turn-based strategy games  brought together for the first time ever in Rise of Nations.

In Rise of Nations, you'll create new cities, improve city infrastructures and expand national borders. Conquer foes through military might using everything from sling-shots to cannons to stealth bombers to nuclear weapons; corner the market on key commodities and consolidate power under your rule; wheel and deal across time with history's eminent cultures.

Cross genre gameplay - Combining pulse-pounding real-time gaming with the epic scope of turn-based strategy games, Rise of Nations gives you a fast and fun experience. You can play a quick battle on your choice of map as your choice of nation (including random), or play the turn-based/RTS mix Conquer the World Campaign.

Zooming scale - See enormous swaths of territory at once or zoom to watch one group of citizens or military unit at work. Maintain command of multiple cities and expansive military campaigns while still controlling the progress of individual cities and battles. Clearly defined national borders let you expand territory strategically.

Multiple victory conditions  Gain dominion through non-military and quasi-military strategies including espionage, diplomacy, technology races and territory expansion. Or, simply obliterate all comers through the raw power of a military conquest.

Streamlined multiplayer  In the multiplayer mode (up to 8 players), you'll accumulate resources and move through different time periods quickly, reaching the coup de grace in a timely fashion. Victory is just moments away.