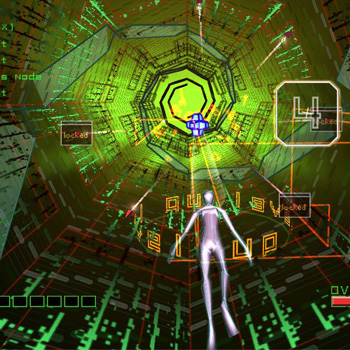 The new action video game that will not only shock your fingertips -- but also shock you out of your senses!
Calling (shooting) and Responsing (destroying) enemy viruses will steadily create phrases of music which will lead the player into a dreamlike world of sound and sense. As the player concentrates harder and harder on the game, random sound effects will turn into a steady rhythm, while waves of lights and colors will consume the player entirely. And when sound and visual effects ultimately come together, Rez will open your senses to a totally unbelievable experience like nothing you have ever felt before.

Welcome to the world of Rez!

Playing Rez is very simple. Just lock on the attacking viruses and destroy them. Conquer each level as they appear before you, and new stages will keep opening ahead -- taking you deeper and deeper into the dramatic world of Rez. There is no need for special talent in music or action. All you have to do is play the game, and when you start feeling the beat rise inside you, music and rhythm will already be dancing around your senses with breathtaking reality.
The music you "create" will be released from the DUAL SHOCK controller of Play Station 2 as vibrations that run through both your body and soul. The vibrations when synchronized with the music and visual effects will give you an experience like none ever before. If you are able to play with the Trance Vibrator (sold separately) connected to the Play Station 2, the vibrations will be even more extreme! The impact of sound, visual effects and vibrations all coming together at you at the same time is so indescribably great that there is no way to explain it but experience it yourself!

Rez also has many different play modes. For players who are not so good at action games, or if you just want to instantly experience the magic of sound, light and vibration, the game mode "Easy Rez" is perfect. When playing this game mode, you are invincible against the virus enemies which allows you to concentrate on enjoying the world of Rez. Easy Rez is also great for practicing Rez. And the more you play Rez, the more stages and game modes you will discover.

The ultimate new game that will take you into a trance!