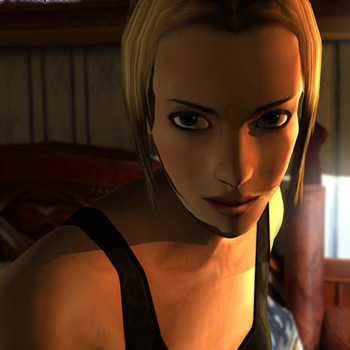 Eternal Darkness: Sanity's Requiem is a psycological thriller brought to you by the Canadian based Silicon Knights. In ED, you play a total of twelve characters, spanning several locations and dates. You will play in Ancient Rome, Persia, the Middle East, and modern-day Rhode Island.

Throughout the game, you will have access to several projectile and melee weapons, such as swords, torches, shotguns, and pistols.

ED features a unique Magick system, which requires you to combine different Runes to create different magick spells. Some of these spells are Restoration, Bind, and others that will aid you in your quest.

ED has a unique feature called Sanity. If an enemy sees you, your Sanity level drops. When your Sanity gets low, weird things start to happen. Walls begin to bleed, you hear voices, the camera gets disoriented. There are close to 30 things that can happen when you've lost your grasp on reality. By performing a special move, called a Finisher, you can regain your Sanity. Aside from this, you have a health meter and a stamina meter.