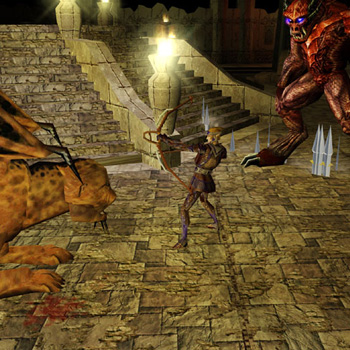 Based on the Dungeons and Dragon 3rd edition rules, you can play a single player campaign worth 60 hours of gameplay or take to the internet and challenge fellow warriors in a range of challenges and more.

Set in a medieval fantasy world, you have the opportunity to choose from plenty of different races, magic classes and battle styles to insure your character is a unique prospect in the world. The main quests have you challenging the greatest evil in the world of Forgotten Realms, with mini-quests to stem the tide between major battles. Some mini-quests are class specific, while others can alter your stance between good and evil.

If your not happy with the world Bioware has created for you, you can create your own using an advanced yet simple tool kit. Create a world full of your own special characters, items and deadly situations, that only you can solve.

Multiplayer modes including Dungeon Master (where you control the traps and battles set for other players in the dungeon) and a range of game types such as hunting for treasure or a simple death match battle between players.